Whether it was the crowd, atmosphere or level of play, it was easy to tell a berth in the Division IV Eastern District Championship game was on the line as Shadyside and Malvern met

Unfortunately, with the madness comes a cruel reality that a loss means a season comes to an end.

Shadyside experienced all of the above, including the sting of defeat, Tuesday evening as the Hornets, who led by as many as 12 in the second half on two occassions, hung on for a 60-59 overtime victory.

“One thing about these kids is there’s no quit,” Andes said outside a very somber Shadyside locker room. “That’s a very good Malvern team we just played, and for our kids to come back the way they did, I am so proud of this group.”

While the Tigers’ season comes to a close, Malvern will prepare to take on IVC-rival Hiland at New Philadelphia High School on Friday.

Though the Hornets will begin preparation for the Hawks today, head coach Dennis Tucci spent most of his post-game media session heaping praise on the Tigers.

“We were a little bit luckier than Shadyside and that’s what it came down,” Tucci said. “The whole town should be proud of that team because there was no quit in those Tigers. They played great and just wouldn’t go away even when they had chances to go away.”

Shadyside found itself trailing, 47-35 in the latter stage of the third before closing with the final six thanks to a pair of bonus goals from Tyler Parr.

Senior Kelly Hendershot opened the scoring in the fourth quarter with a break-away dunk. Shadyside got within two at 50-48 on a 3-pointer from Korey Beckett, but the Hornets answered with a 3 of their own from Derik Hutcheson and then got a pair at the line, pushing the upperhand back to seven.

However, the Tigers were simply unfazed. Beckett, who led all scorers in the game with 21 points, knocked in his fifth triple of the game, but again two more charity tosses by Kenneth Martin made it 57-51.

Parr sliced down the lane and was fouled for a conventional 3-point play. Malvern, which was solid at the foul line most of the game, missed a pair and Shadyside rebounded.

Malvern, somehow, lost track of Beckett again, who drained another 3-pointer with 20 seconds to go. Malvern’s shot at the buzzer was off the mark and Shadyside’s desperation heave was nowhere close, sending the game to OT.

Shadyside struck first in the extra period when Parr, who finished with 15 to support Beckett, got free inside for an easy one. Malvern junior Johnny Browning was fouled in the act and cashed both to knot the game.

The Tigers were victimized by a turnover and then were whistled for a foul as Browning drove to the basket with 2.1 seconds to play. He made the first and missed the second on purpose, but Shadyside’s heave was well off the mark.

“Now, we know what Frontier felt like,” Andes said referencing Shadyside’s triple-overtime thriller on Friday. “I can sympathize with (Roger Kirkpatrick) now. It always hurts to lose, but the way we battled and came back is something that can make (the loss) a little easier to swallow.” 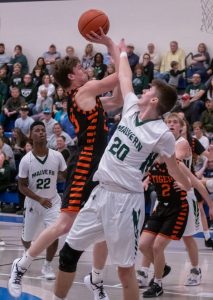 The cliche that games are won and lost at the foul line certainly proved true. The Hornets were a solid 11-of-18 at the line, but the Tigers converted just two of their nine tries.

“This is the second straight game where we didn’t shoot well at the line,” Andes said. “The kids get a ton of them up (in practice), but it’s tough to simulate everything going on in practice. When you’re out there, it’s just you and the rim. It’s just a tough way to go out.”

Along with the Tigers’ season coming to a close, it also brings Hendershot’s highly decorated career to an end. He finished with eight points, giving him 1,469 in his all-state career.

“It was a great year, and I just love this team,” Hendershot said as he battled emotion. “We just fell short. We missed a couple of foul shots. It hurts. I couldn’t have had the season and career that I did if it wasn’t for my teammates and coaches. They pushed me every day. I want to thank Coach Andes for letting me come into his program and being the leader of the team.”

Malvern was led by Browning and Hutcheson, who went for 19 and 15, respectively.