Photos Courtesy of Kristin Mazgaj of The Times Leader

SHADYSIDE — Caldwell rolled into Shadyside a year ago and eliminated the Tigers in Division IV sectional play. Fate often times rears its head in athletics, as the Tigers were presented with the opportunity to make amends for that postseason setback.

Coach Ed Andes’ charges did just that, posting a 60-46 workman-like triumph over the Redskins Tuesday night in a ruggedly-played affair. Shadyside now advances to Friday’s sectional co-final, playing host to Frontier in a 7 p.m. start.

A Tigers’ win would not have come to fruition against Caldwell if not for the sterling play of the Tigers’ reserves. Andes was forced to go deep into his bench in the second quarter due to foul issues and some ineffective play from his regulars.

Shadyside led 11-7 after one quarter. At one point in the second period, tough-minded sophomore point guard Mason Vannest was the lone Tiger starter on the floor.

Instead of just weathering the storm, spirited play by subs Jordan Joseph, Jacob Visnic, Alec Shepherd and Nick Murphy helped the Tigers stretch the lead to 20-13 at intermission. 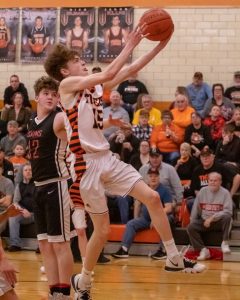 The hosts continued to stretch their lead early in the fourth stanza and built its biggest lead of the night at 53-34 with 4:15 remaining on a Joseph trey. Shadyside subsequently went into clock-killing mode, never allowing the Redskins to cut the deficit into single digits.

“Our bench came up big for us. They did a great job in the second quarter. Jordan was really exceptional and Jacob hit a couple of big shots for us,” Andes said. “I thought we played tight (Tuesday). Maybe that was because they beat us last year. We didn’t do a good job of closing it out. We turned it over, missed foul shots and committed senseless fouls down the stretch.

“But the the main thing is we advanced. Caldwell is a quality team. Now we must get ready for Frontier. They have some talented players. It is nice to be able to play at home again.”

Hendershot, despite being idled in the second quarter with foul issues, still topped all scorers with 18 points, including two crowd-pleasing dunks. Parr, meanwhile, was his chief support with 15 points, Joseph produced eight points and boundless hustle. 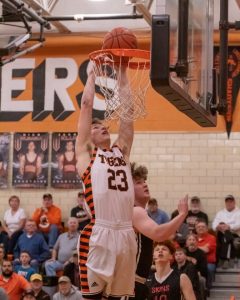 Shadyside improved to a sharp 17-6. Coach Clint Crane’s crew closed out at 12-11 with a bright future looming. The Redskins had no seniors on their roster.

“It was a physical game and we didn’t respond real well at times to it. But overall I thought our kids played well,” Crane said. “Give Shadyside credit. They are a well-coached team. They may have had a chip on their shoulder from last year.”