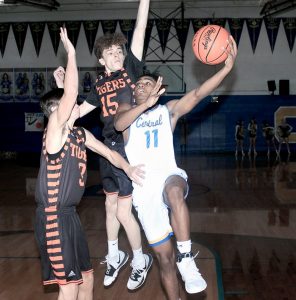 STEUBENVILLE — Sometimes, one just has to tip its hat to the other person.

Such was the case Tuesday, as the talented Shadyside Tigers spoiled Catholic Central’s senior night with a convincing 72-36 victory inside the Mickey Barber Gymnasium.

“Shadyside is a good, well-coached team,” Central coach Don Ogden said. “They are at a level that we hopefully can get to — that’s what we keep preaching. We saw tonight why they have the record they have.

“When you play teams like this, it’s a good test of humility to see where you really are. Unfortunately, we got more humility than I wanted to. It’s tough watching a butt-whipping, but that’s what we had to watch tonight.”

The Tigers, who improved to 15-5 and probably locked up the second seed for next week’s OVAC Class 2A tournament, led from wire to wire. Korey Beckett drained a corner triple to get things started. After Charles Miller scored for the Crusaders, Shadyside went on an 11-0 run and never looked back.

Kelly Hendershot started the scoring spree with a jumper in the paint. He then ended it with a 3-pointer. Ed Andes’ crew led 18-7 after the opening quarter. Thanks to eight points from Bryce Amos and four more Hendershot tallies, Shadyside increased its advantage to 20 (35-15) at the intermission.

“We want to get out and get after it right away,” Andes said. “We did that tonight, and we’ve been doing a good job of that the last five games.

“As a team, we’re playing better now. We’re starting to gel at the right time as we near tournament time.”

Amos and Hendershot combined for 13 third-quarter points. Shadyside went up, 56-25, with eight minutes to play.

“We shot pretty well for an away game (the Tigers finished 8 of 14 from behind the arc). Any time you can go on the road and shoot it as well we did, that’s something you just can’t beat.”

The Tigers also were strong on the defensive end, limiting Central to just 14 field goals.

“We’ll regroup,” Ogden said. “It’s one game, and it’s over with. We just have to move on. Our kids are resilient. I have full confidence that we will rebound, have good practices and get ready for Bellaire on Friday.”

¯ Prior to the varsity tip, Central honored its three seniors in Connor, Anthony LeFever and Chole Maragos.

“You couldn’t ask for a better group of guys,” Ogden said. “They are 100 percent class on and off the court. They represent this school, this team and the community well. They are great role models for our younger guys.

“They’re just great people, and that’s a reflection of this school and the families they come from. I’ve totally enjoyed working with them this season.”

¯ Anthony Venditti had the hot hand, as Central posted a 44-36 victory in the junior varsity contest. He finished with 25 points. Primo Toriscelli added nine for the Crusaders. Elijah Brock tallied 16 to pace the Tigers.