For The Times Leader

SHADYSIDE — Leading by 11 points with just 1:11 to play Monday night everything seemed to be going as planned for top-seeded Shadyside as the Tigers were attempting to make a third consecutive trip to the Ohio Valley Athletic Conference Class AA championship game.

However, a feisty, injury-riddled and determined Wheeling Central team had other plans as the Maroon Knights rallied late, forced overtime and crushed Shadyside’s plans.

Junior Marissa Horan scored a game-high 23 points, including 14 in the fourth period and overtime, and Central overcame an early 14-point deficit and a late 11-point hole to shock the Tigers by a 66-62 margin in overtime at the Tiger Den.

Meanwhile, Coach Serge Gentile’s Tigers fall to 15-6 and will be left to wonder what could have been heading into sectionals.

“I have been coaching for 35 years and I have to tell you this one ranks up there pretty high,” a smiling and elated Kurtz said afterwards. “I am so proud of these girls. This just says so much for this team and its desire.

“Before the game we talked about going out and doing whatever it took to win and that is exactly what these girls did (Monday).”

With senior all-staters Eden Gainer and Kaylee Reinbeau again watching from the bench injured, classmate Hannah White, playing hobbled by a nagging hip injury, fouled out with 3:26 to go in overtime and the score knotted at 52-52.

Freshman Lily Vogrin, who finished with 10 points off the bench, gave the visitors a 55-52 edge with a 3-point bomb and the Knights’ first lead since 8-6 midway through the first quarter. A pair of charity tosses from junior Tory Hendershot and a triple from classmate Kamdyn Elerick put the Tigers back in front by a 57-55 margin.

Shadyside’s final lead of the night came on pair of Baylee Wach free throws at 1:47 of the extra session that made it 59-58. Wheeling Central then moved out to a 64-59 cushion with 25 ticks to go on six free throws.

A Wach bomb at 12 seconds made it 64-62 and after Horan hit one-of-two at the line the hosts called time out with 10 seconds to play. Their final attempt to tie was off the mark and Horan closed the scoring with another charity toss before the Maroon Knights exploded in celebration at the final horn.

“Nothing went our way for over three quarters and then in the final minute everything seemed to go our way,” Kurtz said. “We hadn’t pressed the entire game and I think we caught them off guard a little when we did late and forced a couple of big turnovers.

“And Hannah (White) and Marissa (Horan) knocked down some big shots late in the fourth. As much as we have missed our big three at times the other girls have gotten some valuable playing time and we have been close but not able to close out some games.

“There were times (Monday) when we had as many as three freshmen on the court against a pretty veteran, and good, Shadyside team. I don’t think anyone thought we might be playing for a championship, but our season isn’t over yet and they are playing their hearts out.”

Central had battled back to within four a few times in the second half but still trailed 51-40 with 1:11 to go. That was before Hannah White drained a pair of triples and Horan added another to cut it to 51-49 with 11 seconds to play.

Wach made one-of-two at the line before a long three from Horan just ahead of the horn found nothing but net to force the extra session.

Hendershot had an outstanding night for the Tigers with team-highs of 20 points and 12 rebounds while Wach added 17 and Brooke Selmon and Elerick evenly divided 20 points.

The Maroon Knights grabbed a 45-36 edge off the glass while Shadyside turned the ball over 15 times, 11 fewer than their guests.

“They made plays when they had to and we didn’t,” Gentile said. “They played harder, they executed better and they beat us. We were not a very well-coached team (Monday) and that is on me.

“Obviously we were not prepared, but we still had a chance to win the game. They out-hustled us and were getting balls that were hitting our hands or we were just watching go by. They also pushed us around inside.

“This was our 21st game and we are fighting the same battles and the same demons and that is all on me.” 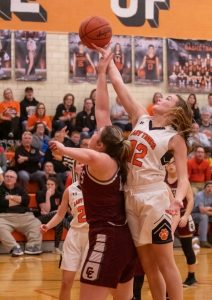