On Tuesday, Bryce Amos lit up the scoreboard, torching Bellaire for 33 points in a 22-point victory.

It was Korey Beckett’s turn Friday night, and he had a career night doing it.

The sophomore guard tickled the twine for a game-high 31 points as the Tigers pulled away for a 75-60 victory against Frontier in a battle of two potential OVAC Tournament squads.

“He was very confident (Friday),” Shadyside head coach Ed Andes said of Beckett, who scored all but four of his points in the first three periods.

“He played well. He’d shoot the 3, then he’d go off the dribble. He just played a very good all-around game.” 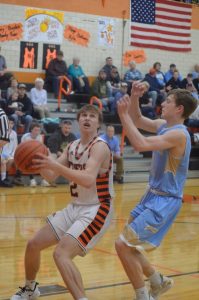 Kelly Hendershot and Amos added 22 and 13 points, respectively, for the Tigers, who improved their place in the OVAC Class 2A field. At 13-5, the Tigers appear to be safe in securing a berth in the field, which will be determined after Tuesday night’s games.

Meanwhile, at 11-6, Frontier remains the frontrunner in Class 1A. The inside duo of Logan Brookover and Kyle Daugherty went for 21 and 11 points, respectively, but the Cougars struggled to make headway against Shadyside’s talented backcourt.

“They shot the ball extremely well,” Frontier head coach Roger Kirkpatrick said. “We had a hand in their face. They were just the better team. We’ll get ready for the OVACs and continue to get better.”

s withAfter failing to ake a 3 vs. the Big Reds, the Tigers came back with 10 against the Cougar Beckett making six of them. His trey to begin the second quarter broke a 20-all tie and jump-started a 13-3 spurt that featured another Beckett trifecta, along with a 3-point play by Hendershot.

After Tanner Bills cut the Cougars’ deficit to eight, Beckett hit another long-distance bomb and Shadyside had its first double-digit lead of the night.

“That was the big key, coming out early and getting things going in our direction,” Andes said.

Corby Curtis (11 points) hit one of his three 3s late in the third quarter for Frontier making it a 48-40 game. But Hendershot answered with a 3-point play. Beckett then finished the period with another 3 and a bucket at the horn as he was falling to the floor making the score 56-42.

The Tigers, who welcome Linsly tonight, led by as many as 21 in the fourth quarter before Frontier climbed back. But it was too little, too late for the Washington Countians.

“Against good teams you have to make shots and you can’t turn the ball over,” Kirkpatrick said. “I thought we played hard.”

For Andes, he has many players he can turn to who can make shots, and as tournament time draws near, it’s a luxury he enjoys having.

“It’s great for us,” he said. “They makes it harder for other teams to defend us, absolutely.

“The more the merrier.”