Tigers take down Southern in Semi’s! 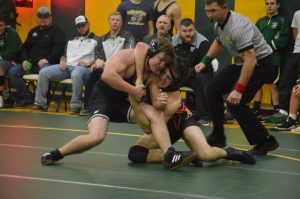 WELLSBURG — The days and years on the calendar may change, but Shenandoah winning OVAC Bill Hinegardner Dual Meet Championships doesn’t.

The top-seeded Zeps three-peated Thursday night by claiming the Class 1A/2A title with a 63-12 triumph over No. 3 Shadyside after disposing of fourth-seeded Bridgeport, 48-21, in the semifinals.

“We’re just building momentum toward the end of the season,” Shenandoah coach Jesse Wells said. “It feels really good in how far we’ve come in a short amount of time. The kids have bought in and worked really hard. It’s an awesome feeling.”

The Tigers, who barely finished the season a year ago after a dominant run several years back, received victories from Andrew Brown (132) and Jakob Klug (170).

“From where we were last year with only four kids to where we are now being OVAC runnersup team-wise, that’s obviously a great direction that we’re going in,” Shadyside second-year coach Chase Kinemond said. “Hopefully, we can continue that the remainder of this year and into next year.”

Shadyside made it to the finals with a thrilling, 36-30, win over No. 2 Southern Local.

Bridgeport defeated Southern Local, 40-27, for third place. The Bulldogs were the defending class champs but graduation losses took their toll.