Story by Seth Staskey of The Times Leader

BYESVILLE — Shadyside, quite simple, wasn’t going to be denied its second regional title in school history.

Still, however, there were plenty of anxious moments in Byesville on the night of Nov. 17, 2001 against Danville in the Division VI, Region 23 championship game.

“The thing that I remember the most about that game, and the week leading up to it, are how focused and determined our team and coaches were,” Michael Kernik, who was the Tigers quarterback that season and a current Tigers assistant, said. “Our entire community was excited that we were in position to play for a regional championship.” 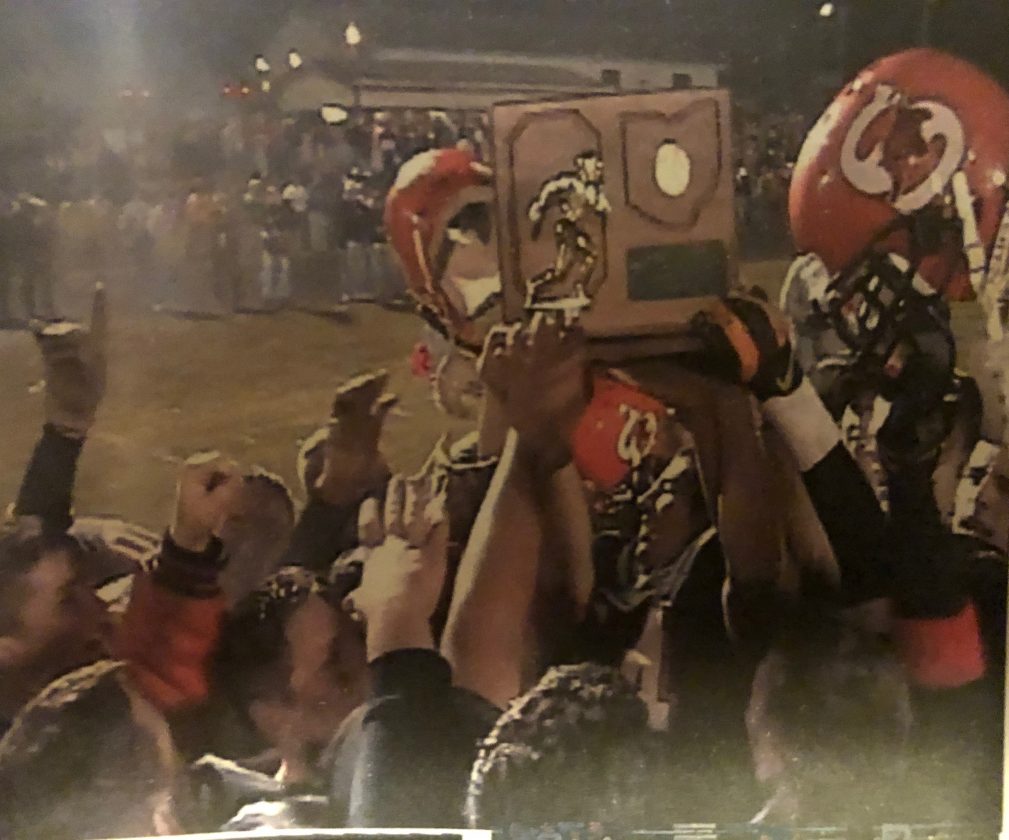 The Tigers, who had won their only other regional title in 1989 prior to the 2001 campaign, had to find a way by all means necessary. It just so happened it took a miracle. Actually, it took what was dubbed the ‘Miracle at Meadowbrook’ to send the Tigers to the state semifinals against Mogadore.

“Being completely honest, as (Danville) got the ball back, with the lead, and only two minutes to play, a second of doubt came over most of the players,” Josh Pyles, a wide receiver, said.

Shadyside’s hopes appeared bleak. Combating the Danville offense, which ran a Wing-T, had been a challenge all evening. On top of that, the Tigers had to overcome a bad punt, which gave the Blue Devils ideal field position.

The Tigers’ defense stiffened and Sean Grinch, who is a current member of the Shadyside coaching staff, recorded a quarterback sack on fourth down, giving his offense and Kernik the ball back with just 99 seconds to play.

“All of our preparation, hard work and team unity put us in one of those positions that you always dream about playing in to win a football game,” Kernik said.

After picking up a minimal gain on a Kernik to Tom Keane pass, the Tigers misfired on two straight throws, bringing up fourth down and putting the season on the brink.

“I noticed, on third down, two Danville defenders weren’t paying much attention to me on third down,” Ongley said. “I looked over to Coach (Ty) Fleming and started pointing to myself because I felt like I could get behind the defenders to get a good chunk of yardage or at least a first down.”

Fleming and Kernik took notice, too.

Danville doubled teamed Ongley on the ensuing play, but he got behind the defensive backs. Kernik’s pass was tipped and landed in Ongley’s arms for a huge gain.

“I remember telling Kernik when we broke the huddle to get me the ball no matter what,” Ongley said. “When the ball was in the air, all I remember thinking was, ‘I need to (catch) this ball.’ I am still not sure if I tipped the ball or one of the Danville players did.”

Shadyside — operating without a time out — had first-and-10 on the Danville 28. The Tigers spiked the ball on first down and Kernik scrambled for 8 yards, bringing up third-and-2. Kernik kept a play alive with his feet and found junior running back Danny Dunsmoor for 10 yards and a first down.

Another spike brought up second down with 24 seconds to play. Ongley was targeted again on a quick slant, but the Danville defensive back batted the ball away, bringing up third down. Pyles was left all alone on the ensuing play and Kernik found him in the back corner of the end zone for the touchdown. The try for two failed, leaving the score, 32-28.

“We got Josh’s attention between plays and told him to go behind the double slant, which he did and Michael found him wide open,” Fleming said.

Now almost 17 years later, Pyles gave Fleming credit because he called the play and route on the fly.

“That (scoring) play wasn’t even in our play book,” Pyles said. “I didn’t even know it was fourth down when Nick made his big catch. I was so focused on either catching the ball, getting out of bounds and getting ready for the next play. As we started that drive, we knew we had it. Even when a play didn’t go our way (during that drive), there was no blaming. It was onto the next play.”

Kernik, who was an All-Ohioan that season, said his belief never changed.

“Our coaches always had us so well prepared, and in addition, our team unity boosted our confidence to an even higher level in those tough situations because we all spent so much time together and would do anything for each other.”

As the Tigers celebrated the touchdown, they quickly realized there were a few seconds to play.

“When we got to the sidelines after the touchdown, Coach (Mark) Holenka, the defensive coordinator, was telling everyone the game wasn’t over,” Pyles said.

After a squib kick, Danville took over and opted for a Hail Mary on first down. The pass was picked off by Brandon Holmes, setting off a wild celebration.

Unfortunately, some of the massive crowd, which attended the game, missed the thrilling ending.

“A whole lot of our fans were gone and found out we won when they were in their cars,” Fleming said with a smile. “One couple told me they were getting into their car, heard the roar and ran back to see the ending, but many were gone.”

The Tigers, unfortunately, fell the following week at what was then Fawcett Stadium in Canton to Mogadore in a state semifinal.