Story by Kim North of The Times Leader

The Tigers (8-3) roared past Willow Wood Symmes Valley, 63-8, in a first-round Division VII, Region 27 playoff encounter last Saturday night. This week their test gets much tougher as the third seed faces No. 2 Newark Catholic (8-3) in a Saturday night semifinal matchup on the artificial surface at Meadowbrook High School’s Eugene Capers Field in Byesville. Kickoff is slated for 7 with the winner advancing to the regional finals.

Newark Catholic, which rolled past No. 7 Reedsville Eastern in its playoff opener, has eight state championships, six runnerup finishes and 73 playoff victories (in 100 games). However, it returns to the playoffs for the first time since 2016.

“Offensively, they run from multiple sets all over the place. They will throw the ball when needed, and they will run the ball when they have to,” he added. “They are proficient doing either. In the films we’ve seen, they’ve thrown the ball 107 timea and run it 106.”

The Green Wave are led by senior quarterback Matt Carlisle (6-3, 193).

“He is the guy that stirs the pot. He’s pretty good,” Holenka allowed. “If they lost him, I don’t know what they’ve got behind him.”

“They are a tall team. Everyone is like 6-3. The fullback is 6-3. They’d be a good volleyball team,” Holenka pointed out. “They are scary on offense because they do everything with such precision. They don’t do anything flashy, just the basic stuff well. They’ll run hitches. They’ll run outs. They’ll run corners. They do what they do, but they set it up well. They don’t round the corners off and the quarterback … 1-2 seconds and it (the ball) is out. He looks to be a tough sack because of quick release.”

Defensively, the Green Wave varies its alignments by what the opponent tries to do.

“They will line up in a 4-man front at times, but if you’re going to play smash mouth with them or go double tight, they will go into a 50,” Holenka explained. “Just by watching them on film and the type of teams they’ve beat, they’ve really turned it on in the second half of the season.

Newark Catholic certainly has. After a 1-2 start, they’ve now reeled off seven wins in eight games, including three straight. The lone setback came to still undefeated Division IV Licking Valley, 42-14. The Green Wave has only beaten three teams with winning records and are making their state-record 36th postseason appearance.

“They just didn’t learn how to play football out there, they’ve been at it for awhile now,” Holenka advised. “It’s going to be a challenge for us, but one the kids and coaches will be ready for.”

“A big part of our success was just simplifying the schemes,” he noted. “We went back to the basic fundamentals and techniques. We’ve had good preparation each week.”

Shadyside has been paced by a balanced offensive attack and a ballhawking defense. The Orange and Black put up more than 500 yards of offense last week while holding the Vikings to nearly nothing.

“They are a tremendous team,” Aiello allowed of the Tigers. “The most scary thing about them is that they are a young group of kids. Their passing game is diverse in what they do and they have a very good running attack. Their offensive line is big, athletic and physical.

“Their running back is a downhill runner. He has good power and speed,” Aiella added. “They like to stretch the field with him.”

Leading the offense has been quarterback Rhys Francis. The sophomore has shown much poise all season and that has resulted in some eye-popping numb

Classmate Wyatt Reiman has been the do-everything back for the Tigers. He has racked up 1,838 all-purpose yards, with 1,284 of them being rushing. He has caught 530 yards worth of passes and scored 182 points.

Junior Jacob Visnic is a durable fullback who can both run the ball, if needed, of block very effectively. He has rushed for 276 yards and half-a-dozen touchdowns, while senior flanker Kelly Hendershot has picked up 125 stripes on 16 carries.

Of course, none of those numbers would be possible in not for the work of the guys in the trenches. The offensive line is anchored by sophomore Logan Crozier at center. He is flanked by senior Ryan Cain and junior Mason Geraud at the guards. The tackles rotate between seniors Caleb Davis, Matt Lucey and junior Jalob Honeywell.

Defensively, the Tigers down four consists of Merryman and sophomore Ryan Florence at the ends, while sophomore Gage Joseph and Lucey are the tackles. Cain and Davis supply depth at the tackles. The linebackers are a solid group in senior Jakob Klug, Visnic and Reiman. Jordan Joseph and junior Alec Shepherd are the corners, with Hendershot and Francis manning the safeties.

“They seem to be very good against the run. They force you to pass and beat them deep,” Aiello said.

Klug is the team leader in tackles with 49 solos, 53 assists, seven tackles for loss, four fumble redoveries and 2.5 quarterback sacks. Visnic is next with 44 solo stops and 36 assists. He has 10 TFLs and two intercep 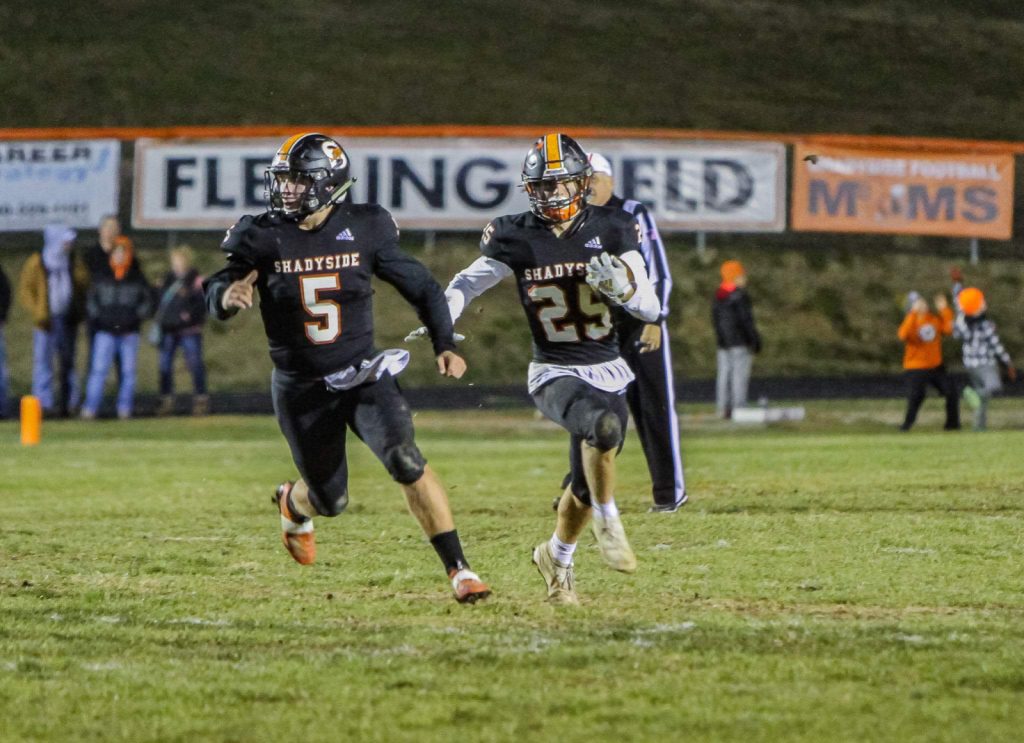 tions. Reiman has logged 41 solo tackles and 30 assists while also leading the team with 11 TFLs. Jordan Joseph has a team-best four interceptions and Merryman had a team-leading four quarterback sacks.

Angel Velasquez has turned into quite a placekicker for the Tigers. He has nailed one field goal this season and 41 PATs, including a 7-for-7 effort last week.

“I’m never pleased with Meadowbrook as a playoff site,” he stressed. “I can live with Meadowbrook if you’re the home team because you get their lockerroom. You can either get a lockerroom that looks like a ticket booth and is dusty and dirty and not everyone can fit in unless they lean on each other, or you can get theirs which is still like a tin barn.”

∫ Shadyside is making its 15th consecutive trip to the postseason and 21st overall. The Tigers are 33-20.

∫ A D-6 regional semifinal will be played Friday night at Red Devil Stadium in St. Clairsville when mighty Glouster Trimble meets New Middletown Springfield. The winner plays the winner of Friday night’s other semifinal between Fort Frye and Mogadore, which will also be played in Byesville.

∫ According to Holenka, the Tigers are 0-4 all-time against the Green Wave.