By Kim North of The Times Leader

SHADYSIDE — If The Shadyside Tigers didn’t play a perfect game Saturday night, it was darn close.

The Tigers (8-3) scored on all seven of their first-half possessions and held visiting Symmes Valley to 9 yards and one first down in the first 24 minutes en route to a decisive, 63-8, triumph in an Ohio Division VII, Region 27 quarterfinal playoff game at chill-filled Fleming Field. 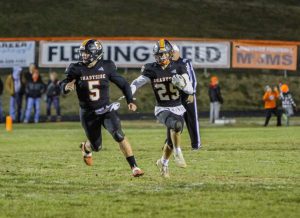 With the victory, Shadyside — the No. 3 seed — will meet second-seeded Newark Catholic (8-3) next Saturday in the regional semifinals at Meadobrook High School. Kickoff will be at 7. The Green Wave defeated Reedsville Eastern, 35-7, Saturday night.

The Tigers piled up 520 yards of total offense and had half-a-different players find the end zone. They limited the sixth-seeded Vikings (9-2) to a mere 50 yards and four stick-movers.

“We were pretty efficient and it worked out that we were able to score when we had the ball and didn’t have to worry about getting behind,” veteran Shadyside head coach Mark Holenka said. “Then, I think everything, along with the enthusiasm and momentum, kind of steamrolled like it can in high school sports and it kind of got out of hand.” 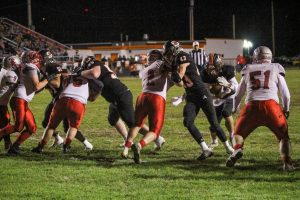 Symmes Valley won the opening coin-toss, but deferred until the second half, allowing Shadyside to take the ball first. That may have been the biggest mistake the Vikings made all night.

The Tigers drove 70 yards on seven plays as sophomore tailback Wyatt Reiman went up the gut from 2 yards out. Angel Velasquez split the uprights with the first of his seven extra-points.

Sophomore quarterback Rhys Francis connected with junior Jordan Joseph on a 20-yard scoring pass to complete a 5-play, 74-yard march that made it 14-0.

Reiman, who ran the ball 11 times for 133 yards and three scores — all in the first half — made it 20-0 with a 11-yard scamper off the left side of the line. He followed the blocking of Logan Crozier, Ryan Cain and Caleb Davis. Velasquez’s kick bumped the count to 21-0.

A 28-0 outburst in the second quarter sealed the deal as Francis tossed three of his four TDs and Reiman ran for his third, that coming on a 34-yard jaunt around his right end.

Francis, who was a nifty 7-of-9 for 151 yards, found tight end Sam Merryman on a pop pass for 10 yards. Merryman, who recently committed to Youngstown State as a long-snapper, broke a tackle at the 30 and rambled into the end zone to complete a 43-yard scoring hookup. The sophomore quarterback then lobbed a pass to the left corner of the end zone that athletic senior Kelly Hendershot outleaped a defender for that resulted in a 2-yard TD. He completed his second-quarter trifecta when he teamed with junior fullback Jacob Visnic from 20 yards out. Visnic ran a flag pattern to the right corner of the end zone and Francis delivered a strike. 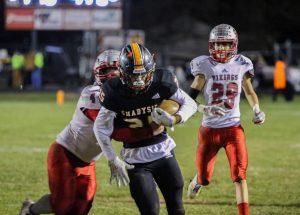 “I was happy that everyone got a score. All of our receivers caught a touchdown and nearly all of our backs scored a touchdown,” Holenka added. “I was glad that we were able to distribute the wealth. That made me happy.”

While the starters were getting a well-deserved rest in the second half, freshman Andrew Brown made the most of his playing time. He ran the ball eight times for 105 yards and scored on a 47-yard run around his left end. He also snagged a 23-yard pass from backup quarterback Garrett Grover that he turned into a touchdown. Grover also ran for two points.

Symmes Valley ran for 41 yards on 27 carries out of its wishbone attack. It was a meager 1-of-10 passing for nine yards.

∫ The Tigersfinished with 21 first downs. The Tigers had 392 yards of offense to nine for the Vikings in the first half.

∫ A moment of silence was held prior to kickoff for Bellaire resident Rick St. John who died recently as the result of a tragic accident.

∫ The entire second half was played with a running clock under the OHSAA’s 30-point mercy rule.