Article by Rick Thorp of The Times Leader

WOODSFIELD — Early in the first and second halves Friday night, Monroe Central pulled to within a score of visiting Shadyside.

And, both times, Wyatt Reiman pulled the rug from out under the Seminoles’ comeback plans. 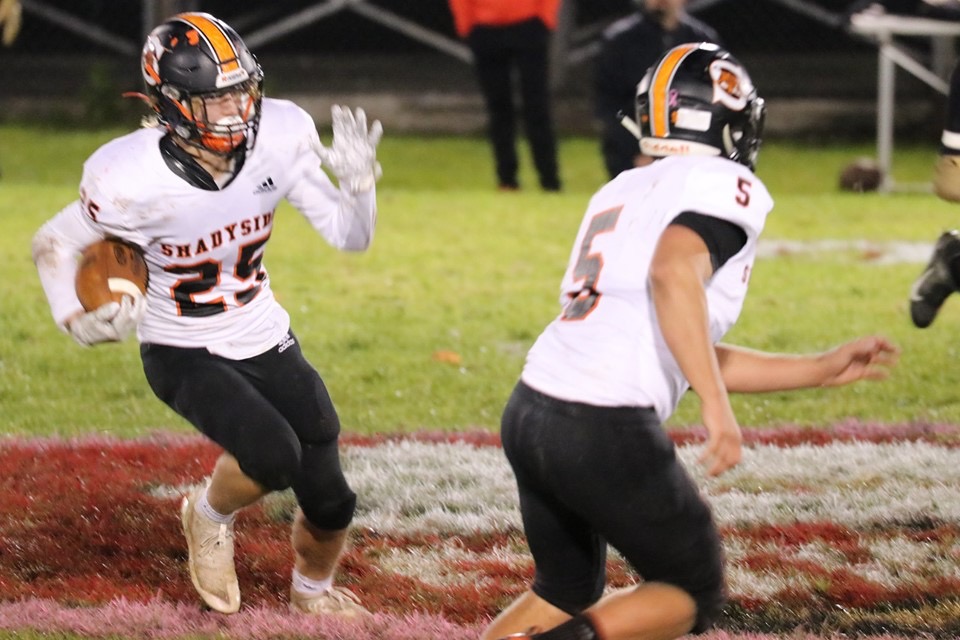 The sophomore had himself a school-record setting night at City Park, scoring six times — four via the rush and two through the air — as the Tigers pulled away for a 49-24 triumph in the regular-season finale clinching an Ohio Division VII, Region 27 playoff berth and a home game next Saturday at Fleming Field.

“It wasn’t the prettiest effort, but we got the job done,” a smiling Shadyside head coach Mark Holenka said inside a raucous Tigers locker room.

“We answered when we needed to at crucial times, and that’s a good thing. But, sometimes, we let them come back, and penalties (14 for 137 yards) hurt us quite a bit.

“If we can get better in the trenches, we’ll see how far that takes us.”

Shadyside (7-3) enters the playoffs for the 15th straight time and is projected to open at home against Symmes Valley. 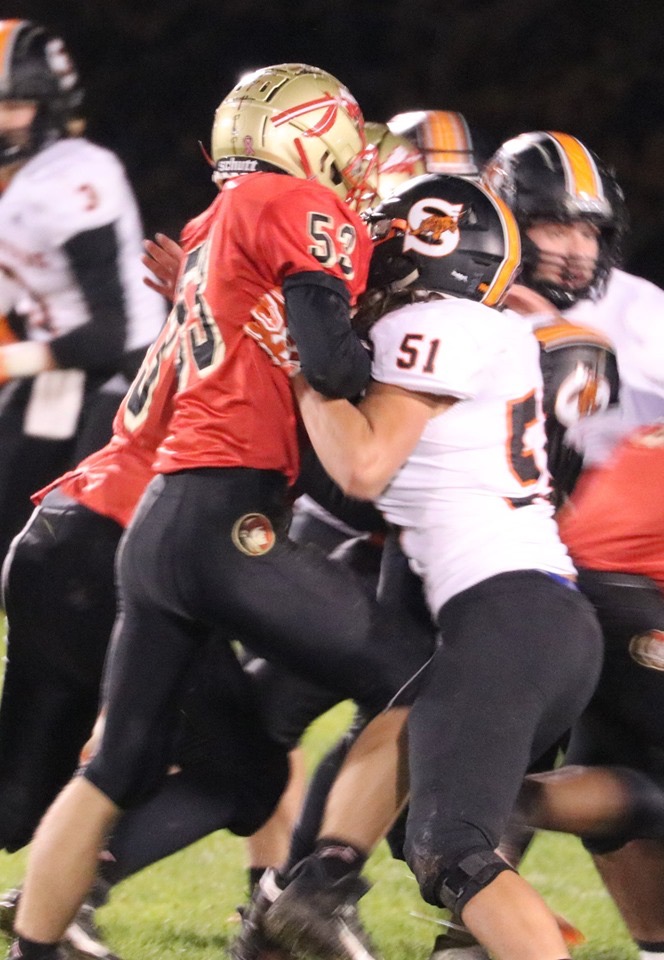 Against the Seminoles, the Tigers struggled to find offensive traction early. But with the help of its defense, which forced three turnovers, and the clutch play of Reiman, Shadyside picked up momentum as the game rolled along.

“We have some things to clean up,” Holenka noted. “I wish we didn’t have to at this point, but, we do. That’s what you have when you have people injured and you have people playing other positions.

“So, hopefully, we can keep getting healthier and try to make it a go as best we can.”

Reiman finished with 144 yards rushing and 134 yards receiving. He hauled in a 47-yard scoring strike from Rhys Francis (156 yards passing) on a 3rd-and-17 play on the Tigers’ first series and, from there, came through time and again when his team needed to respond against the feisty Seminoles.

“I thought Reiman did a heckuva job,”Holenka said. “But, that’s been par for the course this season.”

Alex Kilburn answered Shadyside’s initial score midway through the first, but Reiman came back with scoring scampers of 25 and 11 yards giving the Tigers a 21-6 lead going into halftime.

Kilburn busted loose for a 34-yard TD run on Monroe Central’s first possession of the second half bringing the hosts to within nine — 21-12 — but Reiman broke free for a 61-yard TD later in the period as Shadyside went ahead 28-12. Then, on the first play of the fourth, he went in from 12 yards out, making the score 35-12.

Malachi Rose-Burton’s 1-yard sneak made the score 35-18 with 9 minutes left, but Francis and Reiman hooked up again a short time later — this time for 54 yards — to put the game out of reach.

“They kind of athleted us a few times,”Monroe Central head coach Josh Ischy said. “There were some matchups that were to their benefit, and credit to their coaches and their kids in making plays when they needed to.

“They put their athletes in position where they could make big plays.”

Kilburn finished with 89 yards and two scores as the Seminoles finished 4-6. Going back to last season, Monroe Central is 6 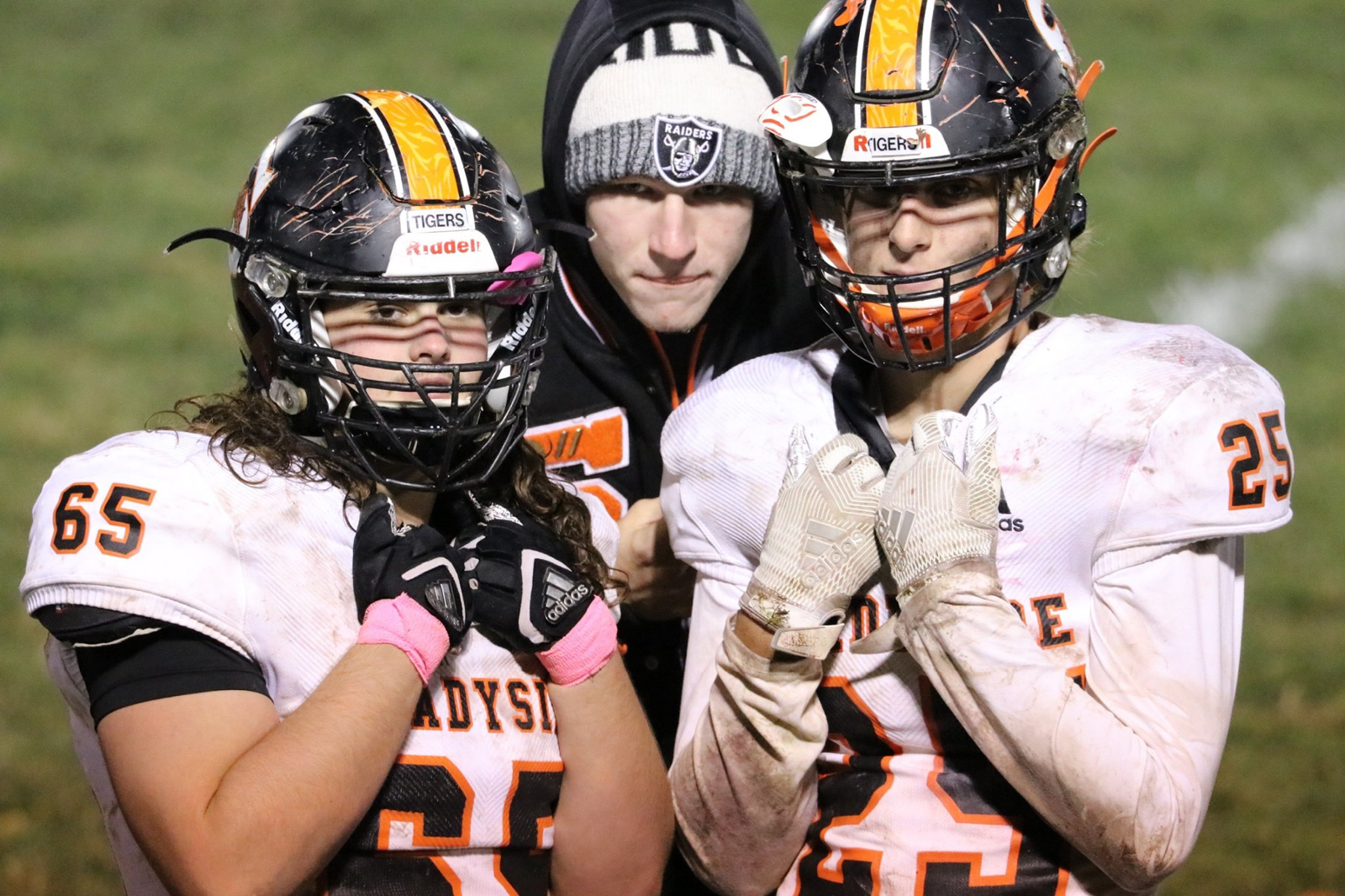 “The one thing I’m proud of is that we progressively got better,” he said. “I feel like we were better at the end of the year than at the beginning.”

Holenka feels the same way about his team too, and he’s eager to see how far this year’s postseason run can go.

“This is a testament to these kids because Shadyside has been in the playoffs, what, 19 of the last 20 years expect 2004?,” Holenka said. “They expect this and they accomplished it. That’s one of our objectives.

“Our goal, obviously, is to win every game. But, we still hit our objective and we’ll go forward from here.”