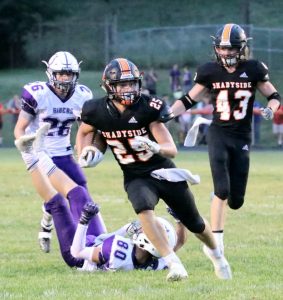 SHADYSIDE – It was one of the most anticipated season openers in the Ohio Valley in years. Prior to Friday night, Martins Ferry and Shadyside had not met on the gridiron since 1929.

The pre-game hype between the two perennial playoff participants morphed into Tiger domination as head coach Mark Holenka’s well-schooled charges rolled to an impressive 33-7 win at Fleming Field. The lopsided triumph was the ideal opening to Shadyside’s 100th year of football.

A trio of sophomores — Mason Vannest, Wyatt Reiman and Rhys Francis — played like seasoned veterans in sparking the Orange past the Purple Riders.

Vannest got Shadyside rolling wit a pick-six, Reiman rushed for 127 yards and three TDs while Francis made his first varsity start at QB a quality one with 184 yards passing, including an 84-yard scoring bomb to talented junior Jordan Joseph.

Not to be overlooked was a suffocating performance by defensive coordinator Sean Grinch’s unit. The Tigers limited the Purple to 26 yards passing and just 105 on the ground.

“We got quality contributions from several young players to go with those from a lot of our seasoned veterans. Reiman really turned the tide. He really ran hard,” Holenka said. “The drive right before half was key. We told our kids the first score in the third quarter would be big. If we score first we would be in control. If they scored to make it 19-14 we would be in a dog fight.

“I can’t say enough about the tremendous defensive game plan Sean put in. Ferry’s only score came off a short field,” he added. “I also must commend the offensive line. I thought they really wore down Ferry.”

After forcing a Ferry three-and-out on the opening possession, the Tigers mounted a drive from their own 45. Using three Reiman carries and two Francis completions, the hosts marched to the Purple Rider four, only to stall on downs.

On the second Purple Rider snap, Vannest stepped in front of a Ferry pass and returned it 10 yards for the game’s first score with 5:12 left in the opening quarter. The kick failed.

Ferry was unable to pick up a first down on its ensuing possession, punting away to the Tiger 31. A clipping penalty moved it back to the Orange 16.

It took the Tigers just one snap to strike again as Francis used a paralyzing pump fake and hit a wide-open Joseph on the sideline and he outraced the Purple secondary for an 84-aerial scoring connection. Angel Velasquez booted the PAT for a 13-0 reading with 4:05 left in the opening chapter.

Ferry got back into the contest midway through the second period after a short Tiger boot, setting up shop at the hosts 40. Four Ferry rushes and an incompletion resulted in a fourth-and two from the Shadyside 20. Hard running Caleb Olson broke loose up the middle and scampered into the end zone for what would prove to be Ferry’s lone TD. Brother Cody Olson tacked on the PAT, trimming the deficit to 13-7.

Shadyside regained the momentum, however, on the strength of an impressive 74-yard, 13-play and time-eating drive. The Tigers needed just one completion on the march as Francis and Reiman alternated carries with the latter climaxing the drive from four yards out with just 36.1 seconds left in the half. The run for two came up shot but the Tigers took a 19-7 lead into halftime.

Shadyside opened some breathing room via a 12-play 87-yard drive, capped by Reiman’s one-yard scoring burst with 3:55 showing in the third quarter. Velasquez’s PAT made it a 26-7 Orange lead.

Ferry’s fate was sealed after it fumbled the ensuing kickoff, covered by Shadyside’s Alec Shepherd. Four snaps later, Reiman finished off his brilliant night with a nine-yard scoring run. Velasquez closed the scoring with another PAT.

“This game was definitely one sided. We were never in it,” Martins Ferry head coach Chas Yoder said. “Shadyside is a really strong team but we must be able to play better.”

“We might be a D-7 school and Ferry a D-5 school but we think we are a pretty good D-7 school. Once in a while we may be like Appalachian State or Troy and take a shot,” Holenka said. “We don’t play those big schools week-in and week-out. So when we do we want to enjoy it.

“I know it is only week one but this is big points for us. This will really help down the road,” he added. “Overall, we are happy. I am proud of my players and staff.”