• Shadyside grad will start at tight end for Bowling Green 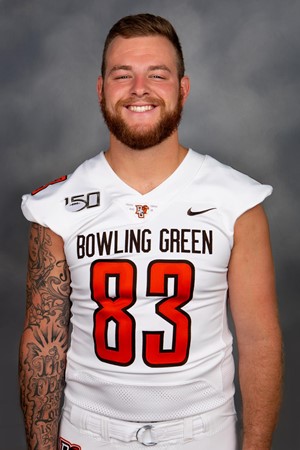 BOWLING GREEN — Austin Dorris has been waiting for the opportunity he has tonight for a long time.

The Shadyside High School product, who is a graduate transfer from Indiana University, will be the starting tight end for the Bowling Green Falcons when they take on Morgan State.

“It’s incredible … just a long time coming,” Dorris said. “It’s very humbling and exciting to have the chance to live out the dream I’ve been chasing since 2015.”

Dorris joined the Falcons in January, beginning graduate school and winter workouts. Being on campus for spring practice with first-year head coach Scott Loeffler was big in helping Dorris’ transition and ability to capture the job.

“I was able to graduate earlier (from Indiana), which allowed me to get to Bowling Green faster,”Dorris sad. “I could have stayed at IU for an additional semester and taken just some general classes, but I felt like it would be more beneficial for me to be around the coaches, players and get started on learning the offense and system. It’s paid off.”

During his time at Indiana, Dorris appeared in 31 games, making only one start. He caught four passes for 16 yards during his stint with the Hoosiers.

Dorris doesn’t think he received the playing time that he should have with the Hoosiers, but he holds not one ounce of ill will toward the Indiana program, coaching staff or his former teammates.

“I don’t regret my four years at Indiana at all,” Dorris admitted. “I met some amazing people, who will be friends for life, and did some amazing things. I just never got the playing time that I saw fit. They’re starting to move in a different direction (offensively), so the timing was good for me to leave and now I can finally reap the benefits.”

Dorris was originally recruited to Indiana by now Ohio State offensive coordinator Kevin Wilson. After his red-shirt freshman season, Wilson was dismissed and Tom Allen was hired. Allen, obviously, brought a different system and approach, meaning Dorris’ role was about to change.

However, that didn’t really bother the multiple-time all-Ohioan. He was aware of the posssibilities of that when he entered college.

“Unless you’re playing at like Ohio University where (Frank) Solich has been there for a long time or Virginia Tech has had basically the same position coaches for a long time, there’s going to be changes,” Dorris said. “There are guys here (at BGSU) that are playing for their third staff, so it’s just something that the vast majority of college football players go through.”

Other than the adjustment from being on a campus with 40,000 students as compared to half that at Bowling Green, Dorris indicated the transition has been smooth.

“We have a good group of guys and we have good athletes,” Dorris said. “It’s a matter of getting the guys to operate under the way things need to be done. It’s a long process, but I think we’ve handled it well as a team.”

Tonight’s game against FCS member Morgan State is big for Dorris, but it’s also big for the Falcons, who were picked near the bottom of the Mid-American Conference’s East Division.

“When you’re playing in the Big Ten and facing a FCS opponent, you kind of tend to take them more lightly,” Dorris admitted. “It can’t be that way here. Every single game is important because it’ the one in hand. We have to earn everything. We have nothing to brag about.”

Dorris and the Falcons will visit Kansas State next week. He will return to the state of Indiana on Oct. 5 when they play at Notre Dame.

Dorris will be joined by his mother, Gloria, and father, Bob, on the field Nov. 19 for senior night against Ohio.

“It’s pretty insane how fast (college) has gone,” Dorris said. “I still remember everything from that first year being a 220-pounder quarterback (in high school) to trying to play tight end. I have absolutely no regrets. It’s been an unbelievable ride and I just hopeful that this season goes well and I can go out on the right foot.”

Dorris, who owns a degree in media from IU, is purusing a MBA at Bowling Green and since he was able to enroll in time for the winter semester and BG will extend his football scholarship, so he’s able to complete his master’s tuition free.