Talk about a fundraising effort!  The Shadyside Boosters have announced a plan to to raise money for a new all turf football field at Fleming Field.

Booster President Bud Davis announced on Wednesday night that the Boosters have formed a committee to look at the idea of changing the Fleming Field complex football field from grass to all turf. He reported to the membership that the committee has already met with several companies and have received their cost estimations for the job.

“We’ve set some pretty lofty goals but I feel like they are all goals that can be achieved, said Davis.  We’re already off to a good start and will be providing information to the community in the coming weeks on various fundraising efforts.  We’ll’ kick things off with a Booster Tailgate party prior to the Martins Ferry game.  All donations collected from that will be directed towards the field.  Every little bit helps.  We’ll also be targeting corporate sponsors in the coming months.  We think we can get this done or obviously we wouldn’t have taken on the project,” Davis continued. 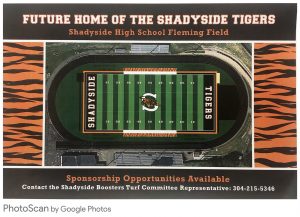 Davis went on to point out that a sub-committee of the Boosters organization had been formed that included booster members, coaches, school administration and community members.  That committee  includes Davis himself, Brian Hendershot of OH/WV Excavating, Superintendent John Haswell, Athletic Director, John Triveri, BOE member Doug Campbell, Coaches Jeff Campbell and Mark Holenka, as well as community members, Tony Francis and Shane Florence.   The committee will meet on a regular basis and report back to the Booster membership.