As we near the start of football season, details of the upcoming celebration of 100 years of Tiger football have been announced by the Athletic Department. 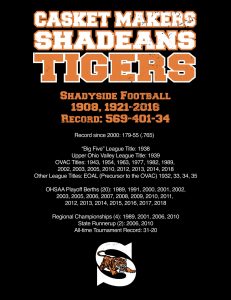 hn Triveri has announced that the October 4 game versus River High School will be the celebration game.  At this game players and coaches from 100 years of Tiger football will be acknowledged.  Shadyside resident, Hank Kapolka will be in attendance as the oldest living former football player.  Returning to the gridiron will be players and coaches from seven different decades of Tiger football, including undefeated teams and playoff teams.

There is still time to register for former players.  That registration deadline has been set as SEPTEMBER 25.  A $20 registration fee will include a ticket to the game, entry in to the Boosters tailgate party, a commemorative t-shirt and entry to the post game social at the Little League fields, site of the original Tiger football field. Players can pick up their t-shirts at the pass gate  on the night of the game as they will be distributed by Melanie Haswell.

“Should be a great football game between great rivals and an electric atmosphere.  We’re hoping for a good attendance and the cooperation of mother nature,” said Triveri.

Gates for the Booster’s Tailgate Party will open at 5:00pm.  Past players can report to the ticket booth pass gate anytime after that.