Article by Rick Thorp of the Time Times Leader

SHADYSIDE — When you don’t trail until the third set of your volleyball match, it’s a pretty good night. 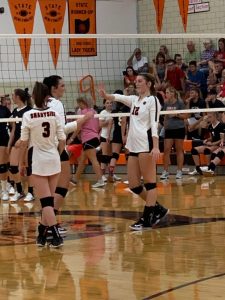 That was the case for Shadyside on Monday, as the Lady Tigers jumped out early on Bellaire and raced to a convincing straight-set victory inside a steamy Tiger Den.

The 25-8, 25-9, 25-16 triumph, according to Shadyside interim head coach Eric Mercer, was littered with solid performances.

“The girls played well,” he said. “We started fast and worked together.”

Shadyside hit Bellaire with a right hook early, jumping out to a 12-4 lead that Bellaire head coach Erica Miller said had her squad on its heels.

“They didn’t look like they wanted to be there,” she said. “There was no enthusiasm. They played dead.”

“We had good energy,” Coach Mercer said. “I was happy with our out-of-system plays. We didn’t have three-point passes, but we were making great out-of-system swings and having some really nice court vision and hitting some good spots.” 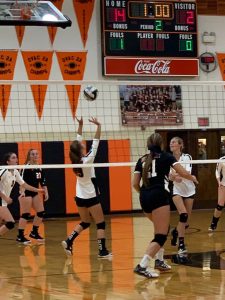 After racing to the 16-point triumph in Set 2, Shadyside looked poised for a blowout. But Bellaire had other ideas.

The Big Reds kept things close in the third set. They jumped out 3-0 thanks to an Addie Conroy kill.

Shadyside scored five straight, however, to take the lead. Bellaire, though, stayed with the hosts until a 4-1 run midway through widened the gap.

“The first two games, our effort was terrible,” Miller said. “I knew (Shadyside) was a very, very good team. At least in that third game, we came back and played hard and had more energy. That’s the team I know we can be.

“Hopefully, (today vs. River) we can bring more of what we had in that third set.”

Coach Mercer was happy to see his squad respond to the adversity of the third set, as well as that of the past 10 days since former head coach Cindy Archer tendered her resignation and he was handed the interim tag.

“I think they’ve handled it great,” he said of the transition.

“I tell them we’re here to play ball and don’t worry about what happens off the court. Let’s just come in here, practice and get some wins.”