Courtesy of the Times Leader

SHADYSIDE — The numbers are simply staggering. 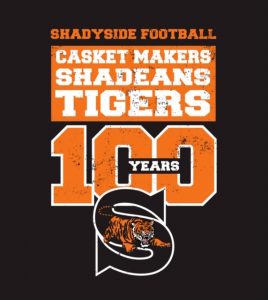 Whether it’s the wins (569), playoff berths (20), state championship game appearances (2) or OVAC titles (14), the amount of success enjoyed by the Shadyside football program is matched or exceeded by very few in the Ohio Valley.

Regardless of what category of Shadyside football success you examine, however, the number 100 is what resonates the most.

That’s the number of seasons, including 2019, that football has been played in Shadyside and a season-long celebration is being planned.

“This is a magnificant milestone,” Shadyside Superintendent John Haswell said. “Many great athletes have laced them up during that 100 years and we have a rich football tradition to celebrate this year.”

Shadyside played its first season of football in 1908 and then went on a 12-season hiatus before resuming in 1921. They’ve had a team every year since. In its history, Shadyside has had 21 head coaches and changed nicknames twice. The school began under the moniker of the ‘Casketmakers’ and switched to ‘Shadeans’ in 1933. It stayed that way until 1963 when it became the Tigers.

While the Tigers plan to celebrate its 100th year of football all season,the biggest event will be held when rival River comes calling to Fleming Field on Friday, Oct. 4.

Haswell chaired a meeting in his office late last month to begin preparations for the events that will include a special decal on the helmet, honorary captains representing each of the Tiger teams that are celebrating an anniversary of an OVAC title or playoff berth this season and the reunion that will be held at halftime of the aforementioned game.

“The excitement is building already,” Haswell said. “Everyone I have talked to about this reunion is excited.”

Through a myriad of communication methods, Shadyside began spreading the word of the reunion almost immediately. All former Tiger players are invited back to take part in the festivities, which will include a pre-game tailgate party, sposored by the Shadyside Boosters, recognition at the game and a post-game social at the Mead Township Park.

Former players returning are being asked to pay $20, which covers a commemorative t-shirt, which will be available to former players only, and admission to the game.

Doug Campbell is handling the RSVPs and providing more detailed information. He can be reached at 740-359-2104 or via email at pdcampbell1@comcast.net.

After returning from Capital University, Haswell spent 10 years on the coaching staff.

“Shadyside football is very special to me,” Haswell said. “I am really looking forward to seeing all of the former players. It’s going to be great to see all of the men that I coached and played with.”

Shadyside’s football tradition is quite storied. All told, the program owns a record of 569-401-34.

Since the turn of the century, however, Shadyside has racked up a 179-55 mark with 18 of those losses coming in the postseasons.

“Shadyside football is a brotherhood like no other,” Haswell said. “The bonds that you make, not only as a player, but as a coach as well, last a lifetime.”

The Tigers’ 100th season of football kicks off officially on Aug. 30 when Martins Ferry comes to town. The Tigers and Purple Riders haven’t played in a regular season game since 1929. Shadyside has never scored against the Purple Riders in their six prior meetings.