Depth.  You have to have it, especially this late in the season.  Cody Hawthorne proved that on Friday night.  After a 23 ya 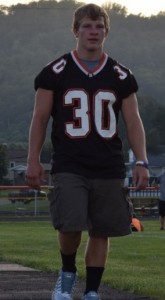 rd run, junior tailback Alex Krupa had to be helped off the field after re-aggravating an ankle injury  originally sustained against Bellaire.  Enter Hawthorne.  The scrappy Tiger senior stepped in the tailback spot and proceeded to carry the pigskin 8 times for 71 yards and two Tiger touchdowns in leading the Tigers to a 48-6 road victory over Bishop Donahue.

Tiger head mentor Mark Holenka commented by saying “Sometimes you win the battle but lose the war for the future.  We did what we wanted but we came out a little lackadaisical in the first series and they jumped on us. But once we got the ball and we started to block a little bit, we did a good job. What I liked about it was that we didn’t have to call timeout and yell or rouse them up.  They were able to shift gear on their own and realize they needed to play better.”

Senior wide receiver also came through in a big way for the Tigers as the 6’4″ wide out hauled in 3 touchdown passes from classmate Billy Johnson.  Johnson finished the evening 9 of 13 for 135 yards, t

hree touchdown passes and no interceptions. Wade would finish with 5 receptions for 105 yards and the three TD receptions.

After spotting the Bishops six points on a long pass from Donahue quarterback, Gage Wilson to the JC Custer, the Tiger offensive and defensive teams went to work and consequently reeled off 48 straight points.

“We expect to win next week.” said Holenka  “In the playoffs ,you have to get better every week or you are going to knocked out pretty quick.”  Sometimes even though you are a 1 seed or 2 seed, that first round game can be your toughest opponent.  We’re excited to be home.  Some place we have a gone in the past…a dungeon would better.”

The Tigers will open up the 2016 OHSAA playoffs at Fleming Field next Saturday night.  Their opponent is unknown at this time.