The Times Leader Player of the Week for week one of the high school football season was back at it again in week three.  Senior quarterback Billy Johnson threw for three touchdowns and was 14 of 23 for 211 yards as he led the Tigers to a 41-19 win over Caldwell last Friday night.  He also rushed 10 times for 111 yards and two scores. 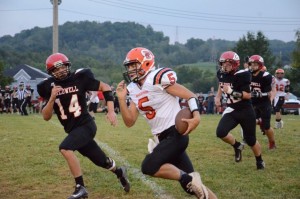 “He’s getting more relaxed in the pocket and that goes hand-in-hand with the offensive line keeping him a little more protected.  He’s getting better on knowing when to give up on a pass play and take things with his legs,” said Head Coach Mark Holenka.

The large Tiger contingent in the stands may have thought it would be a long night judging how Caldwell moved the ball at the onset of the game.  After the opening kickoff, the Redskins marched 69 yards on 11 plays capped by Dalton Ivey 1 yard  plunge into the end zone.

However, all the Redskins did was awaken a sleeping giant as the Orange and Black opened up the offense and let Johnson go to work.  After throwing a pick on his first attempt, Johnson nailed seven of next eight attempts including aerials of 24 and 33 yards to Colton Stutzman and Chase Wade respectively.  Wade would catch another scoring strike in the third quarter. At that point the Tigers were up by a score of 34-7.

Holenka praised his receiving corp.  “Hopefully we’ll be able to keep spreading the wealth,” he said.

Not to be outdone in offense performance, Alex Krupa finished with 91 yards on 15 carries.  Krupa also showed off his skills on special teams as he blocked a punt that eventually led to one of Johnson’s two touchdown runs.

Final numbers showed the Tiger with 334 total yards of offense with Johnson accounting for five touchdowns, three in the air and two on the ground.  He would also split the uprights on all five his PAT’s.

“Offensively, we’ve been good every week,” Holenka said.  Defense has been my concern.  We have some that once in a while get exposed and we are aware of those things and we’ll try to get better at them.”

The Tigers host Meadowbrook (1-2) this week at home.  The crowning of the Tiger homecoming queen will take place during halftime festivities.