When tailback Jesse Cain was ruled out for his senior season early last week, the Tiger football team needed someone to step up and take on the load.  They got just what the doctor ordere 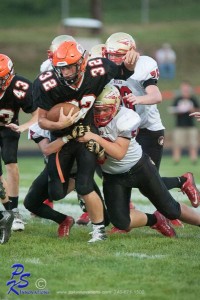 d from junior Alex Krupa and sophomore Connor Banco as the two combined for 334 rushing yards against Monroe Central.

Coach Mark Holenka acknowledged the offense’s dominance against the Seminoles on Friday night by saying he was pleased with the play of the offensive line and the hard running of his new one-two punch in the backfield.  “Our offensive line blocked extremely well and our backs ran hard but we expect that out of them,” said Holenka. 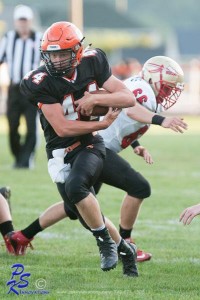 An Ohio Hall of Fame coach, Monroe Central’s Jay Circosta acknowledged his defensive problems stopping the run thus far this season.  “We haven’t been able to stop anyone in our scrimmages or the first two games of the season. That’s been our main problem and I just don’t have any answers at this point,” said Circosta.

“Obviously we’re pleased with the offense but our defense and special teams let us down a little,” said Holenka.  “I thought we made some strides in the first half.  There were some times when we were going to get it together defensively but then they would break a big play…run, pass, whatever.  Then we were back to the same old thing.,” Holenka continued.

Along with the efforts of Krupa and Banco, senior quarterback Billy Johnson, who changed his number from 5 to 3 in honor of senior classmate Cain, finished the game with 9 completions on 13 attempts and rushed for 47 yards on ten carries.

Defensively, the Tigers held the Seminoles to 192 yards of total offense.

The Tigers will hit the road for the first time in the 2016 season as they head to Caldwell. Kickoff is slated for 7:00pm on Friday night.