With a renewed outlook to the future, the Shadyside Boosters Big Cat Lineman Challenge is headed into its 7th year and shows no sign of slowing down.  What has become an annual event in Tigertown at the end of July has been moved this year to the second 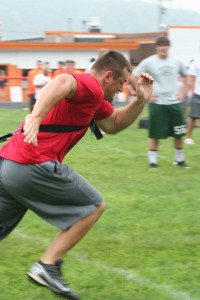 Saturday in July and will be held at Fleming Field on July 9 beginning at 10am.

“This year has been a bit of a struggle for us,” said event director, Doug Campbell.

“We were forced to move the event to the July 9 date because the OVAC changed its All-Star Football game from Sunday to Saturday.  The Saturday is normally when we did the Lineman Challenge.  We thought if we move to a week earlier, we would have to compete with Jamboree in the HIlls and that would be disastrous.  So we decided to go two weeks before and that’s how we ended up on July 9th.  Quite frankly it has hurt us this year,” continued Campbell. 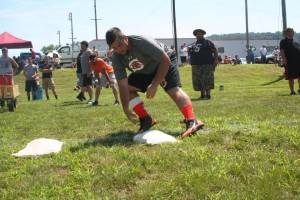 h Booster President Bud Davis and even considered canceling the event this year.  However, a phone call from River High School Head Football Coach, Mike Flannery convinced him to move forward.  “Mike really likes the event and said the kids do as well.  So much so that they actually train to get ready for it specifically.  He told me he would do all he could to do to help make sure we didn’t cancel,”  Campbell commented. 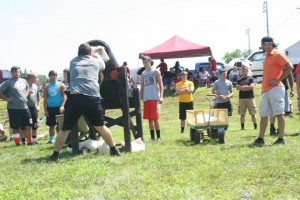 presented their thoughts to the entire Booster club the following week.  Before you knew it, members were scrambling to get things done for this year’s event.  Sponsors were contacted, medals had to be ordered, t-shirts needed to be ordered and volunteers contacted.  Campbell says he’s still rounding up volunteers.

Schools represented in this years event are Shadyside (1 Team), River (2 teams), John Marshall (3 teams) and Buckeye Trail (2 teams).  Monroe Central will not participate in this year’s event for lack of kids.

“Our numbers are a little down but we can’t let that discourage ourselves,” said Campbell.  “We’re already discussing next year.  We’re hoping for a presenting sponsor and are in talks with a local business but nowhere close to being able to announce them yet.  We have some ideas 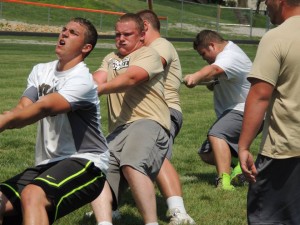 to change things up a bit next year.  We were the first one of this type in the area and we must be doing something right because a number of bigger schools have copied our event.  So now to be competitive, we’ve got to do some new things to keep ours a quality event.  We’re gonna have some fun planning for next year’s event.  I truly believe we run the best of these types of events already.  We provide t-shirts to all participants, we provide medals to the top three finishers of each event, we present an award to the best athlete of the day and to the top team of the day.  On top of that, we feed every participant and their coaches with a great lunch provided by the boosters.  Last year we presented a $500 scholarships to student athletes from Shadyside and John Marshall.  I think what we’ve done over the last seven years speaks for itself,” Campbell finished.

So if you’re out and about next Saturday, be sure to stop by the Big Cat Lineman Challenge at Fleming Field.  Events get underway at 10am.